In January 1875, before the SPG grant for mission work had been secured, an Irishman named Edmund Stenson was appointed by Bishop Webb as the first resident priest in Lesotho. 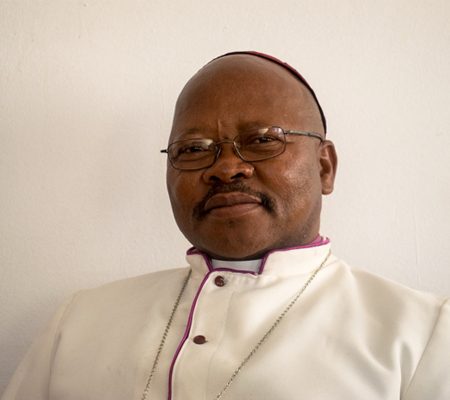 6th Bishop of The Diocese of Lesotho

The Anglican Church of Lesotho has always been part of the then Diocese of Bloemfontein, and currently the Diocese of Free State, from its establishment to the time when it was made an autonomous Diocese in 1950. King Moshoeshoe I, had always wanted the church of the Queen, which is the English Church to be established in Lesotho, and for many times the then Archbishop of Cape Town, His Grace the late Archbishop Thomas Grey, was unable to meet with the King. One time in 1863, Archbishop Grey sent priests from the Diocese of Bloemfontein (Diocese of Free State now) to meet with King Moshoeshoe II, and the first Anglican service with Basotho was performed on Thaba-Bosiu in 1863.

In 1950, the Diocese of Free State bred the Diocese of Lesotho, which is the Anglican Church of Lesotho and the first Bishop of Lesotho in 1950 was Bishop John Arrowsmith Maund until 1976, when he was succeeded by Bishop Desmond Mpilo Tutu until he went back to the Republic of South Africa in 1978. Bishop Phillip Stanley Mokuku then succeeded Bishop Tutu in 1978, until 1997 when he retired and Bishop Andrew Thabo Duma was made the Diocesan Bishop in 1997 and retired in 1999. The late Bishop Joseph Mahapu Tsubella ascended the Cathedra in 1999 until 2005, when he returned to the Republic of South Africa, his home. From 2005, Bishop Phillip Mokuku was appointed by His Grace the then Archbishop of Cape Town, the Most Rev. Njonkongulu Ndungane, as the Vicar General until 2008, when the current Bishop of the Diocese of Lesotho, His Lordship the Right Reverend Adam Andrease Mallane Taaso was elected and consecrated as the Sixth Bishop of the Diocese of Lesotho. Bishop Adam A. M. Taaso was consecrated on the 19th October 2008.

The Diocese of Lesotho is very much involved in the social development of the lives of people and also nurturing of their spiritual lives. The Diocese has the Social Development Office and Gender Desk Office which care for the needs of the people in totality. There is also an Environmental Office which looks after the environment particularly advocating for the Green world under the Provincial Programme; Green Anglicans.

The Anglican Church of Lesotho plays a prophetic role in the society where she speaks against evil systems in the society, particularly in the ruling elite. The Anglican Church of Lesotho also participates much in the development of the youth leadership of the church as prescribed in the synods resolutions books of our Diocese and the Province, that there must be youth representation in all structures of our church, and in any decision making bodies of the Anglican Church. The Anglican Church is contributing more to the education of young Basotho through various projects such as supplying stationery, schools furniture, building schools, renovating old schools and supplying uniform to vulnerable kids in the remote areas.

Amidst all the turbulences and fluxes the Anglican Church in Lesotho passed through in recent years, the Church still is able to fulfill her mission of building God houses of prayer for God’s people to worship Him in the beauty of holiness. Just to mention but a few, His Lordship the Bishop of Lesotho, the Right Reverend Adam Andrease Mallane Taaso, the sixth Bishop of the Anglican Diocese of Lesotho, was able to consecrate and dedicate three huge church buildings; St. Matthias Church – Peka, St. Peter’s Church – Ts’ehlanyane and Good Shepherd Church – Ha Makhoathi. In all these events, there is a large representation from the Office of His Grace the Archbishop of Cape Town and the Metropolitan of the Anglican Church of Southern Africa, the Most Reverend Dr. Cecil Thabo Makgoba. Not only are the churches build, but also that, there is a great number of clergy being ordained to minister to those churches.

In conclusion, the Anglican Church of Lesotho seems to be growing drastically the church also is being seen getting to the people on the ground, offering services to everybody who is in need of them. There is a promising number of Anglicans who come to church every Sunday. The program of doing Bible Studies at churches is also bringing believers to gather together to share the Word of God, and by so doing the Anglicans are not only regular church goers, but quality Anglicans who are deeply rooted in the Love of God and who know the will of God through their extensive interaction with the Word of God. Some of the projects the Anglican Church of Lesotho leadership is planning are unable to take off due to financial constraints and some internal and external human obstructions, but all efforts are in order so that the mission of the church is accomplished.